Our latest webcast on the benefits of AI-powered video automation for online services is available! Start here
Skip to content

Who has the best poker face? An athlete, entrepreneur, editor-in-chief, astronomer, comedian and an MP of Finnish parliament were competing by telling corny jokes while a visual AI was scrutinising facial microexpressions to calculate amusement from the faces of the contestants. 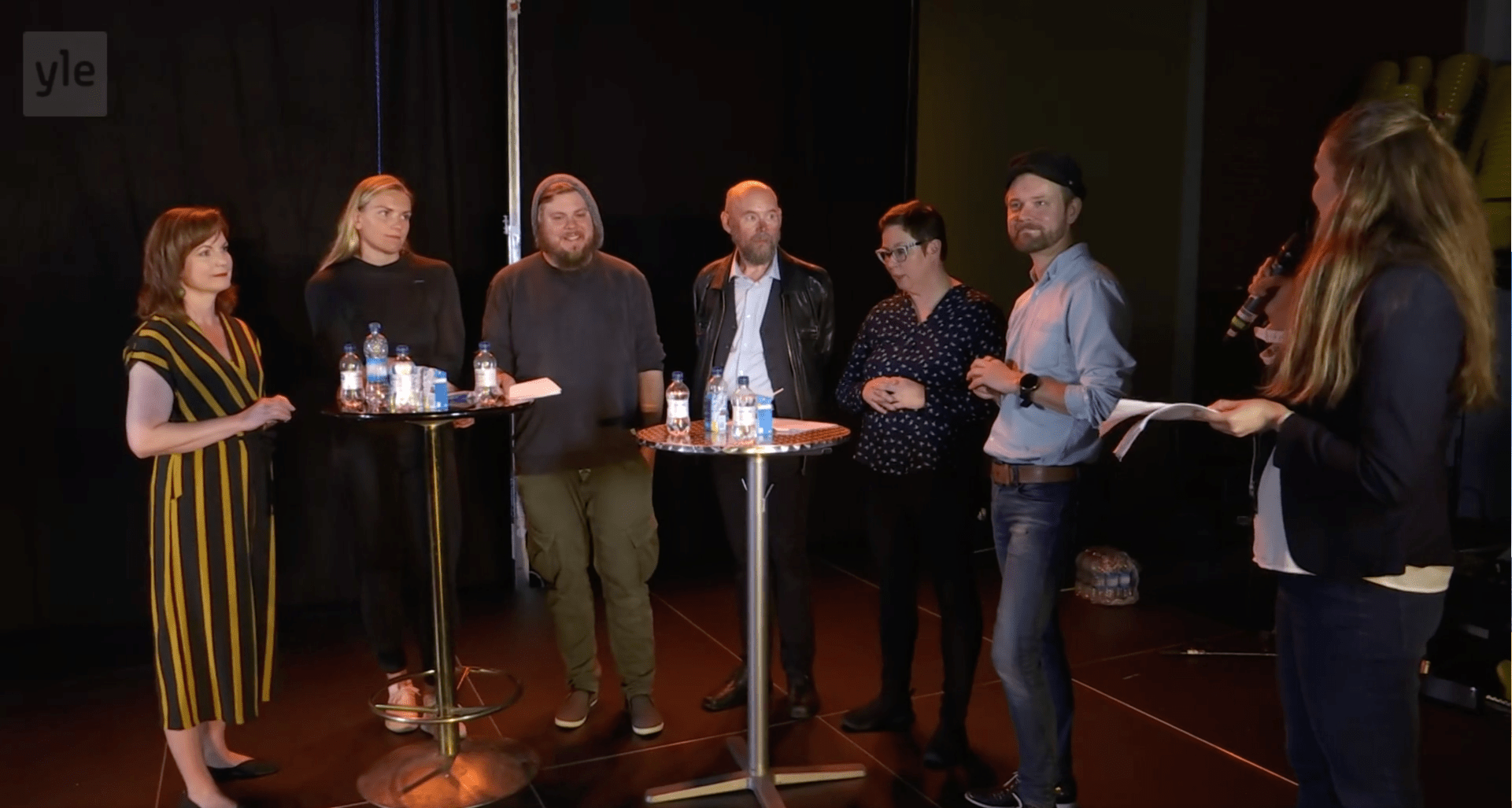 Contestants of the game show. Capture from the Yle Areena Stream.

The goal was to get the opponent laugh at your jokes while they tried to maintain a poker face in front of a live audience. AI immediately reduced points from the team if it found any signs of amusement. The winner was the team that kept a stale face through a series of rounds in front of the AI-powered camera setup.

The setting was made truly interesting by a versatile group of competitors: could a seasoned politician keep a stale face in front of a stand-up comedian, or vice versa? Before telling you the outcome of this first-of-a-kind show, we will introduce the technology behind it.

How we created an AI based judge

Valossa is a company specialising in video recognition and cognitive intelligence. We have developed cognitive video AI for media and live camera systems that sees and hears what is happening in the content. Recently we have built the AI to understand human behaviour in videos, e.g. analysing affect. In a joint project with Yle, we deployed our facial expression recognition for live video streaming workflow and integrated the cognitive AI to their live production equipment to measure actors in real-time.

The artificial intelligence model for capturing human facial behaviour has been trained with huge amount of data to recognise even the tiniest expressions of six basic emotions: anger, disgust, fear, happiness, sadness and surprise, and neutral face. For this competition, AI was focusing on recognising expressions of happiness and amusement that might last even a fraction of a second, which is a mark of an involuntary microexpression, according to the pioneer of the field, Dr. Paul Ekman, professor emeritus and a psychologist. 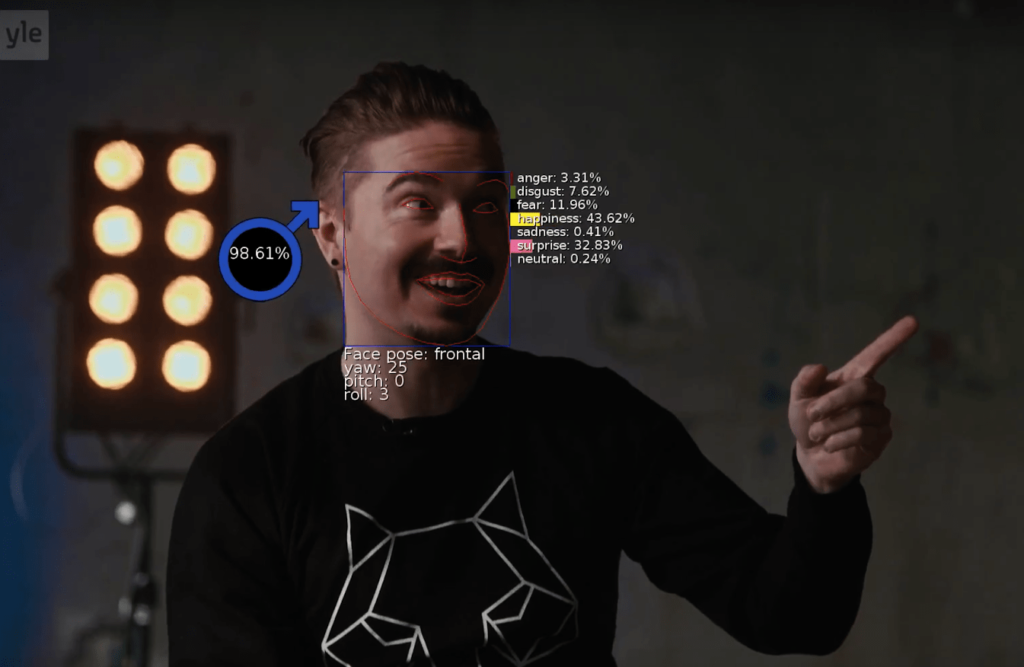 Capture from the video “Sentiment analysis of Viki and Köpi“

Valossa AI models were first experimented with a popular science video from Yle, where broadcasting stars Viki and Köpi were participating in scary human experiments. Yle published a feature article of emotion recognition and AI. We also created on-screen game show graphics to illustrate the judgements of AI in real-time. In the second stage, live analysis unit was deployed to the YLE SNG truck and tested for live broadcasting. 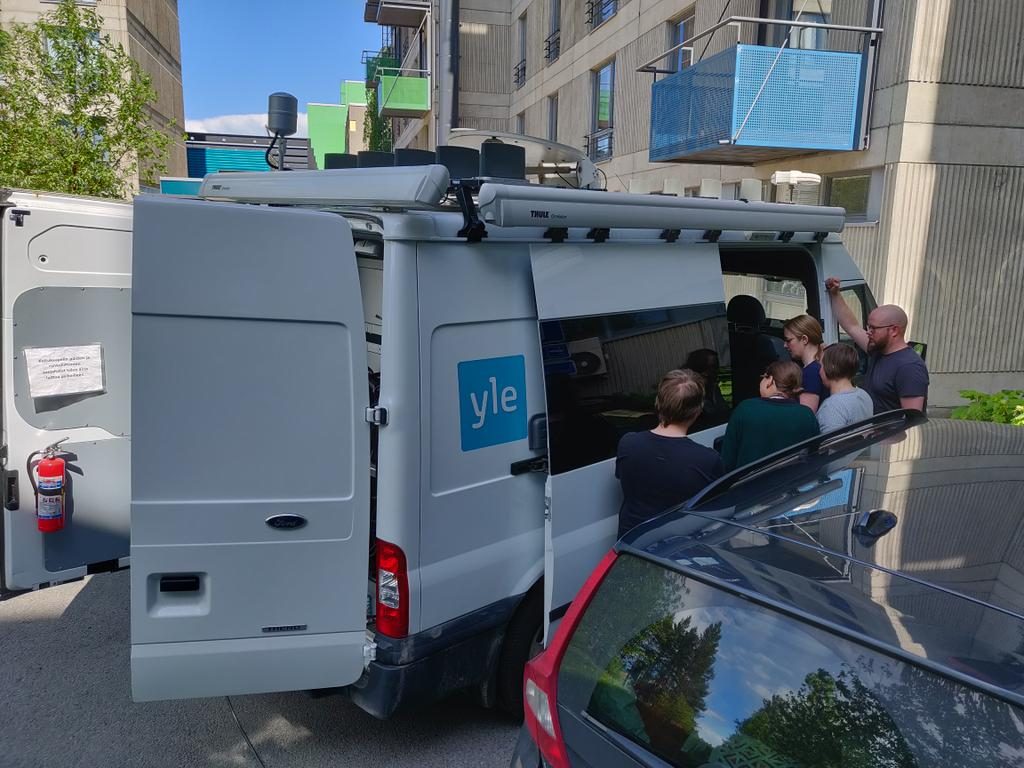 In progress – AI augmentation of a traditional SNG broadcast truck.

The AI results were integrated to the live stream via dynamic graphics that showed real-time judgment and running scores for the competing teams based on detected microexpressions. A feat that has not been seen in a live game show before (as far as we know it). The aim was to bring audiences on the edge of their seats with the novel real-time cognitive augmentations.

And the winner is…

The target for this experiment was judging a live game with a broad range of local celebrities involved. The tension was thick in the air as the competitors, Yle, and us as the AI operators were all nervous about how the judge would perform when the show was streamed live nation-wide. Everything is different in a live setup.

During the qualifications, it was clear that some of the contestants were more potent on keeping their stale face than others. Participating stand-up comedian had the advantage of managing the improvised comedy through his professional expertise, and the politician was well seasoned in keeping a stale face in front of the cameras.

So it was not much of a surprise that in the final battle, a stand-up comedian Iikka Kivi and a well-known Finnish politician, Merja Kyllönen were exchanging jokes one on one. In the first round both Iikka and Merja maintained their poker faces with ease. In the second round, Iikka starts shooting his last remaining joke arsenal at Merja, but seasoned politician just does not laugh and trigger our AI judge. Iikka starts losing his morale and considers giving up. Then, Merja tells her last joke set and Iikka could not help but laugh at Merja’s joke about MPs and toilet humour. Judge and the audience agrees that the winner, by both keeping a stale face and mastering the corny jokes, is the Finnish MP Merja Kyllönen.

Still frame from Yle Areena. See the final round of joke battle at Yle Areena from 42:26 min onward.

Congratulations, Merja! You have measurably proven that your poker face will stand the trials of public media.

Ultimately, the experience was successful and AI was able to demonstrate how cognitive media augmentation can reinvigorate TV show concepts and produce new experiences for modern audiences.

How to Fight Audience Churn with AI-Powered Engagement

Extract highlights and create promotions automatically from your videos.

Use Video Analysis exclusively on detecting potentially inappropriate content from visuals and audio.